If the Spartans and Bandits played each other 13 times this season, the Spartans would come out on top 7-6. Now before he gets cocky [Never! Ed], and prepares for the Flyers in the next round, the most the Spartans scored in 1 week was 153.1 in week 12. The Bandits have beaten that score twice, including with the all-time record-breaking 201.6 points in week 10. Both teams have the ability to win. 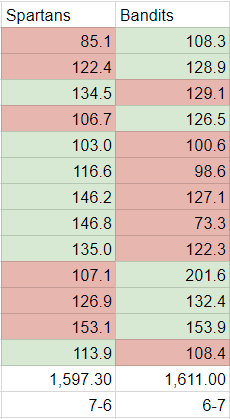 The Spartans are going to need Pat Mahomes (vs Ravens) and Christian McCaffrey (vs Browns) to be on top form again this week, while the Bandits are needing big games from Zeke (Vs Eagles) and OBJ (Vs Redskins) if either have any chance of invading Ireland next week.

Using the 13 game analysis used previously, the Sandslashers lead the bout 8-5 including last weeks close matchup against the Packers. 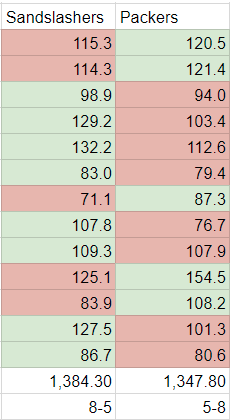 The 2018 team IR that is the Sandslashers have lost big names such as C. Kupp, H. Henry, J. Ajayi and Fit Rob for the season and this week G.Olsen, A.Green and C.Kirk all being put on IR doesn’t put them in a good position. The Packers scoring has been very inconsistent with a lot of highs and a lot of lows, whereas the Sandslashers have been a bit more reliable. As long as the Packers swing high this week, I’m sure they can beat a crippled team on life support.

Can David Johnson (vs Lions) and Dalvin Cook (vs Seahawks) go back to ways of old and carry Chippenham in to Coventry for week 15? Or can the Sandslashers’ Leonard Fournette (vs Titans) and newly acquired Adrian Peterson (vs Giants) run Andover to the nearest Mega Bus departure bay?